Does anyone have a decent video guide to the two olympic lifts?

I'm thinking of adding them into my accessory days to help out with flexibility/mobility plus adding speed and balance into the mix.

Something with Lidia Valentin would be preferred, but, well, anything is OK, as long as they know what they are talking about. So no cross fitters. plenty of clips via google search.

Barbell Brigade has a learn to snatch video that is OK. Its a bit long but it breaks the snatch down into simple steps to learn that are easy to follow.

I think @Fadi; might be one of few people here qualified enough to judge such videos - no offence kunce.

A few years ago I looked to clean up my Power Clean technique and searched a number of videos. It got difficult to discern who was on the money, like a lot of things with a lot of so called "authorities" giving advise. Clean and Jerk and Snatch would be a lot more complicated than the Power Clean

[MENTION=12409]L.P.S.[/MENTION] none taken kunce, in fact I completely agree that he is the one most qualified to answer here. However he seems to be missing in action and has not been seen round here for a few weeks. Anyone know where [MENTION=2727]Fadi[/MENTION] is ??!!

That's the problem. Too many wannabe's posting vids. Bit hard to figure out the crap from the good stuff cos I know bugger all about olympic lifting. Except that it's awesome cos you are allowed to drop the base.

imo, would not worry about Olympic lifts woody.

this is from my upcoming book; draft at this stage.

A 2015 article, which includes the perspective of many leading sports trainers, notesthat Olympic lifts are not necessary and take too much time to master technique(Joe DeFranco); that the distinct skills of Olympic Lifts developed are separatefrom those experienced in sport and not easily transferable (Luke Behncke and MichaelYessis); that power and explosiveness is just as effectively developed by saferoptions such as medicine ball training, skipping drills, heidens, and sprintwork (when applicable) (Tony Gentilcore); that explosive exercise (includingOlympic lifts, variants of plyometric-style training and traditional weighttraining exercises performed with a very fast cadence) do not translate betterinto enhanced sporting performance compared to weight training with a slowcadence when combined with sports specific training (Stewart Bruce-Low and DaveSmith); that power, on a neurological level, is a specific skill that is only enhancedthrough specific practice and coaching as “lifting fast or explosively has verylittle to do with how fast you run, jump, or throw on the track or field” andoffers no advantage over “slower tempo, high-intensity strength training” (ErickMinor); and that “Training to compete on the platform, weightlifting,powerlifting or kettlebell lifting, is not the same as using the power tools ofthe iron sports to improve your performance in the field, in the ring, or onthe mat” (Pavel Tsatsouline).

The best (safest) thing you can do is go and receive some coaching, but I totally agree with sparto on this one.

specificity has really been a chestnut over the years, Arthur Jones had a lot to say about this in the 70's.

back then there where no S&C and conditioning coaches it was thought that added muscle tissue would slow one down, in the late 70's studies where proving this wrong, so some NFL clubs enlisted the help from Olympic lifters with disastrous consequences.

Olympic lifts are not necessary and take too much time to master technique
Click to expand...

But I want to.

fair enough. I am sure you would do well in them if you applied yourself; another competition option.

this is for you woody

woody, I am actually thinking (again) of competing in Olympic lifts in 2017. I want to join PA, but I expect I wont be welcome so olympic lifts may be best option which allows me to keep helping out with non PA feds.

spartacus said:
woody, I am actually thinking (again) of competing in Olympic lifts in 2017. I want to join PA, but I expect I wont be welcome so olympic lifts may be best option which allows me to keep helping out with non PA feds.
Click to expand...

I think thats a great idea. We need more competitors on here.

spartacus said:
this is for you woody

what about you woody, would you have a go at Olympic lifts once you learn basics?

Mebbe. I had not considered competing, just wanted something interesting for mobility, plus I think it would help with speed as well. It also might get some sweet young thing in booty shorts to come do snatches wif me. I so lonely. 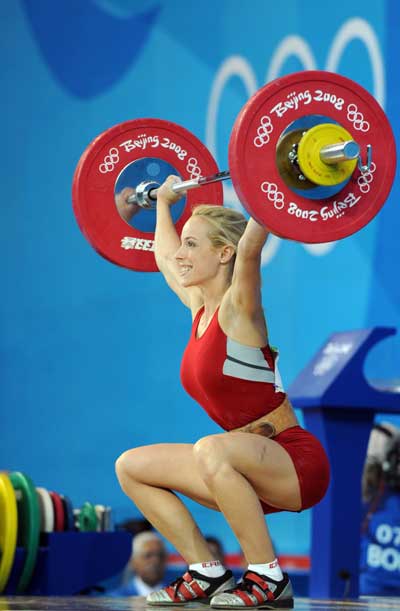 If you're a beginner like the Asian looking man in the above video, then you have no business grabbing a weightlifting bar. The starting point (and no this is not some silly joke), is a broomstick. Every weightlifter (even the elite ones) have their own broomstick. The only difference between the beginner and the elite is the purpose of owning a broomstick.

For the beginner, it's about repetitiveness of the same motion, a thousand times over and over again before moving up to a 20kg weightlifting barbell. Basically take a week (a full week), where the broomstick becomes an extension of your limbs and nervous system, where you finally (at the end of that week), you simply move on autopilot/100% automatic.

Some will laugh, whilst others might feel the need to ridicule what I've written above, but I've yet to see a baby walk before they crawl.

At about minute 19 onwards in the above video, the instructor begins to talk of a split between two phases of the lift: phase one then phase two. He asks the lifter to pull his shoulders back upon reaching phase two of the pull. Doing so (in my opinion) would result in the bar being lost behind the back once in the squat position..., especially in the snatch lift.

The instructor seems to take things way out of context when mentioning (or putting down) the hip thrust, which in my opinion is the most crucial element as the second pull, (bar above the knees) is reached. He believes that lifters who thrust their hips forward, would cause the bar to suddenly lose its path in front of the lifter. That is not true at all, and if I continue writing, I think I'll be writing for another hour. So how about I'll answer direct questions on the Olympic lifts if anyone is interested.

Thanks for the video Fadi.

I'm one step in front of you though. I already have the broomstick. Actually, it's a piece of heavy dowel, about 25mm diameter and longer than my full arm stretch. I bought it for shoulder dislocates and while using it, I thought that going one step further would be a fun idea: using it to practice snatches.

I also am expecting a new barbell to arrive either this week or in about another month or two (depending on the courier beating the christmas rush) and will use that as the next step, doing practice lifts with the empty bar.

But first I wanted to find out how to do the lifts properly so that I don't have to relearn stuff later. Or get injured. It would be embarrassing to get an injury with an empty bar. Or a broomstick for that matter.

I have started watching this vid as well. It has an interesting point on where to hold the bar so that it sits in the right position when just standing upright. But still have yet to watch it all.