No dead weight here that's for sure. Impressive!

Damn clickbait. I was expecting something else. 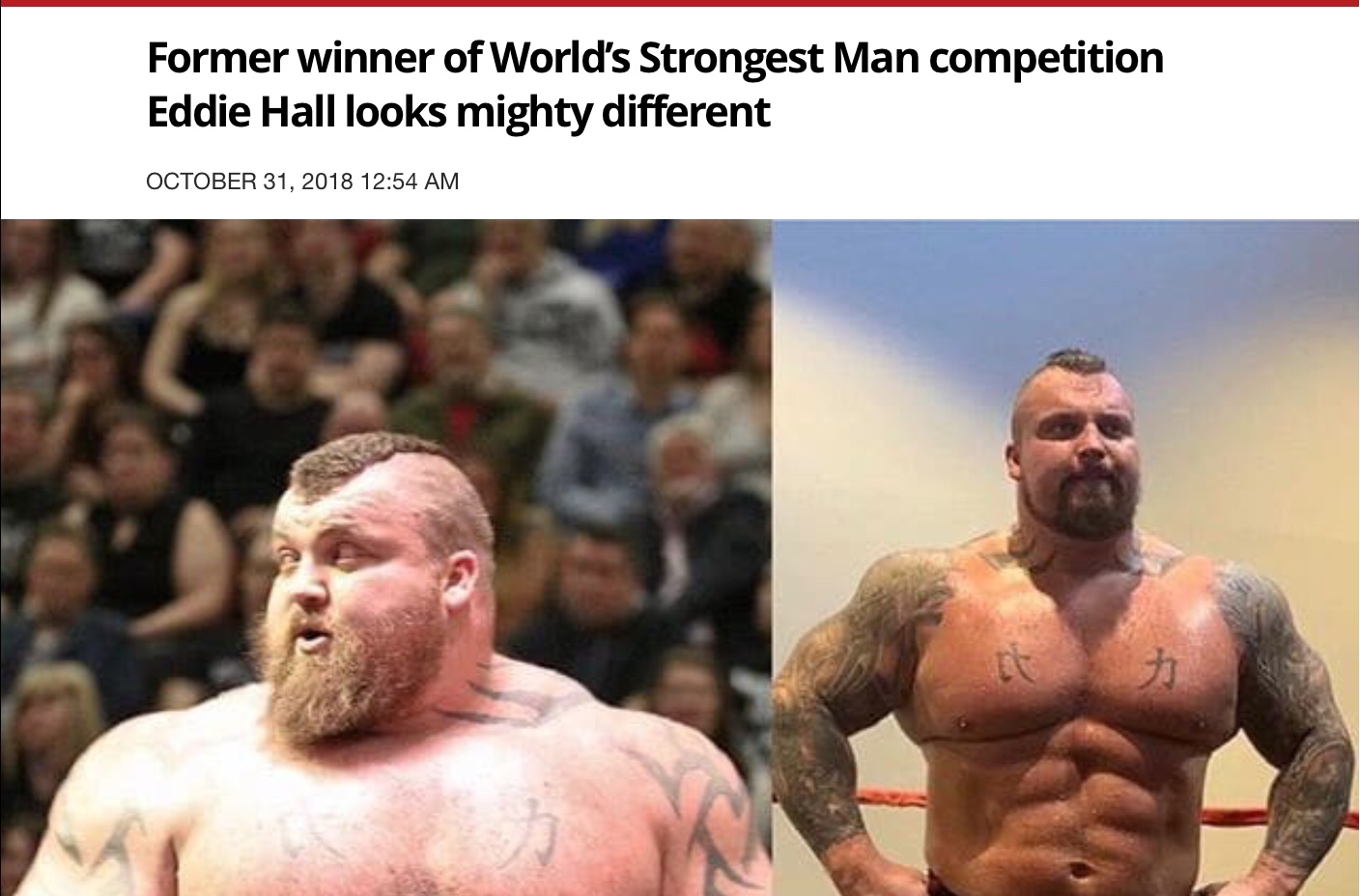 HERE’S a before and after shot you can build an advertising campaign around.
Eddie Hall reached the pinnacle of his sport in 2017 when he won the World’s Strongest Man crown — to go along with several strongman titles he’d claimed previously across the UK. But fans might not recognise him anymore as the bulging belly has been replaced with a six pack in recent times.
Last week the 30-year-old — who at his heaviest tipped the scales at a whopping 196kg — uploaded a side-by-side shot comparing his old self to the new and improved version — and the difference is startling.
Not only has The Beast, as he’s been nicknamed, visited the tattoo parlour a few more times since his “before” shot was captured, he’s also been shedding plenty of kilos. He’s reportedly dropped more than 30kg, going from 195kg to 164kg this year.
As Hall showed off his new physique, he revealed some advice for those wanting to know how he successfully transformed himself.
“Breakfast is the most important meal of the day; this is where most people will make their first BIG mistake if they’re trying to lose weight,” Hall wrote on Instagram next to a photo of him sitting in the sun with a glass of orange juice in front of him.
“Coffee … The caffeine in your morning coffee stops an enzyme called amylase from working correctly, which is located in your mouth and gut, and breaks down starchy carbs.

“If you have coffee with your cereal, toast or granola, this is the worst way to start your day.
“Try some citric acid instead, which can actually increase the production of amylase … a glass of orange juice instead is the perfect replacement.”
He’s no scientist, so don’t take this as gospel, but whatever Hall is doing is obviously working.
According to The Daily Star, part of Hall’s weight loss regime includes doing five cardio sessions a week in addition to multiple weight-training sessions. In 2017 he appeared on UK TV and said: “Cardio training for big guys is unique, you have to adapt it so that you don’t lose muscle and you don’t tire out.
“Using methods to not only improve your cardiovascular system but also help your body to recover after weight sessions by shifting lactic acid, helping the tendons, ligaments and muscles to repair.”
The retired star also used social media to explain why he no longer competes in strongman competitions.
“For the people that keep asking why I don’t compete at the World’s Strongest Man anymore, simple: I choose to live a healthier life now and enjoy the fruits of my labour,” he said.
“I felt as though the sun was beginning to set on my life and I needed to start swimming back from dark waters to start to see sunlight again.”

Last year Hall became the first Englishman to win the World’s Strongest Man competition in 24 years. He came out on top in the squat lift, Viking press and deadlift rounds on his way to winning the finals ahead of Iceland’s Hafthor Julius Bjornsson, aka The Mountain from hit TV showGame of Thrones, who finished second.
At the time, Hall’s diet included eating raw steaks and consuming 12,000 calories a day.
He revealed to The Sunbefore the event how maintaining his massive weight put a huge strain on his body and meant he could not fit into cars or chairs.
“I’m chasing a dream. I just want to win World’s Strongest Man once,” he said. “But I’ve got to be level-headed and think not only about myself but my family, my kids.
“I don’t want them growing up without a dad. I just want to win the worlds, do what I’m destined to do then drop to around 25 stone. That will be a nice safe level for me.
“I can’t go into restaurants without breaking a chair. Fitting through single doorways, I have to turn sideways.
“Getting in and out of a car is impossible as the seats don’t go back far enough.
“I’m not the tallest man but because of my muscle thickness my head always touches the roof.”
When he was at his heaviest, Hall said his weight gain had brought on sleep apnoea and the only way to deal with it was to sleep wearing an oxygen mask.
“To put it blankly, if I stayed like this for another ten years I’d die. Being this size and this weight is a dark place,” he said last year. “All the organs are under pressure.
“I am two big guys, two 98kg people in one unit. It’s almost impossible. Sleep is horrendous as there is so much muscle mass on my lungs and throat.”

He got some weird looking pecs